New York City, 19th March 2018 – Domus Semo Sancus (DSS) today announced the release of its “Visualize Connections for ICIJ Databases” link analysis graphing tool. The International Consortium of Investigative Journalists (ICIJ) is a global network of investigative journalists and media organizations who focus “…on issues that do not stop at national frontiers: cross-border crime, corruption, and the accountability of power.” Their databases contain information on more than 785,000 entities that are part of the Panama Papers, the Offshore Leaks, the Bahamas Leaks, and the Paradise Papers investigations. The data covers nearly 80 years up to 2016 with links to people and companies in more than 200 countries and territories. 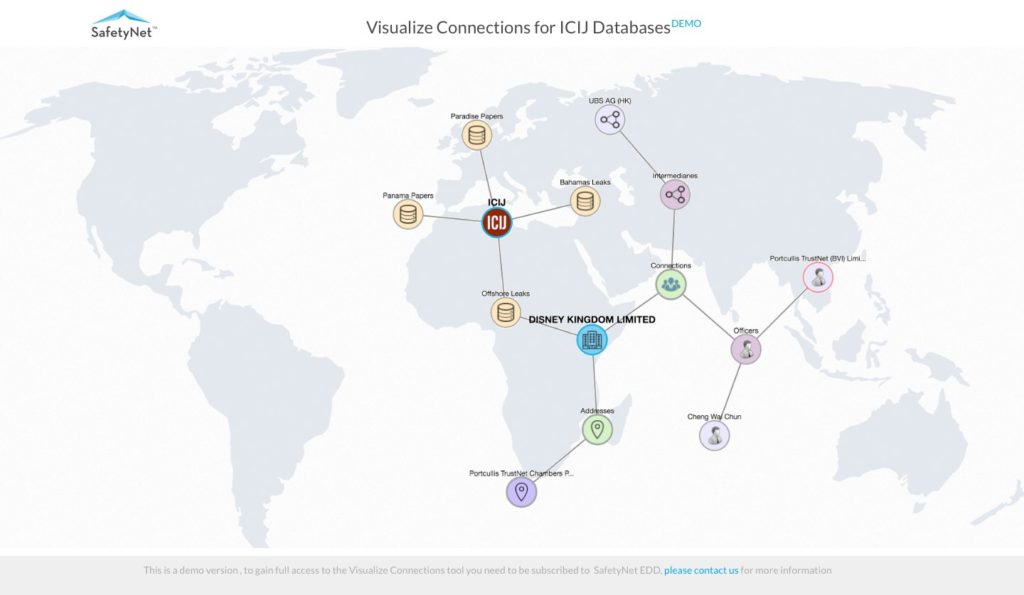 Visualize Connections for ICIJ Databases is a customized version of Visualize Connections, DSS’ cognitive link analysis tool that can graphically display relationships between entities found within structured and unstructured data. It can graph the data within the ICIJ Databases within seconds, and with “one click”, while not requiring the end-user to download the data or install the application. Visualize Connections for ICIJ Databases is fully integrated with SafetyNet.ai, DSS’ award-winning Enhanced Due Diligence (EDD) cognitive search tool. Through this integration, end-users can quickly and seamlessly cross-reference data from within the ICIJ databases with internal files or data found on the internet.

“Visualize Connections is a very powerful, but user-friendly graphing tool, that greatly increases our clients’ ability to manage risk, and I’m happy that it’s now being made available across most of our plans” states Piyush Dubey, Lead Developer of Visualize Connections. Commenting on the release, Chairman and CEO of DSS, E. Jay Saunders stated “As the information within the ICIJ databases are now in the public domain, some of our clients want to know if they contain anything that they should be aware of, or that could help them, or their clients better manage risk. With Visualize Connections, our clients can quickly and easily see the connections between the data within the ICIJ databases, and if needed, use SafetyNet to seamlessly and securely cross-reference that data with their own internal company data and/or data from across the internet.”

Visualize Connections for ICIJ Databases is available free of charge to all subscribers to SafetyNet’s EDD (or higher) plans.

A live demo of Visualize Connections for ICIJ Databases can be found at www.safetynet.ai or safetynet.ai/vc4icij_demo/.

Domus Semo Sancus (DSS) Ltd, founded by E. Jay Saunders in November 2014, is a financial technology company that is building tools to encourage financial inclusion and bridge the e-commerce divide.

SafetyNet.ai is DSS’ award-winning enhanced due diligence (EDD) cognitive search and crime prevention tool. It helps companies comply with KYC and AML rules and regulations by utilizing an artificial intelligence engine to help companies spot and mitigate risks before they become threats. SafetyNet.ai is cloud based and is offered in the following subscriptions: Lite, EDD (Enhanced Due Diligence), EDD Enterprise, Safe City, and Developer.